Edwin Akwudolu 2:43:00 PM Phones, Social Media
In this era of technological evolution and highly competitive tech market that we all can attest to, I have a single sentence for tech companies “If as a tech company with products and you dare to lag now, you and your products will be swallowed”.

Hope the message is clear?

There are many tech companies out there that have once ruled the world with their varieties of products, but because of the stiffness in competition after falling short in some aspects of their technology they get completely swallowed by their rivals. 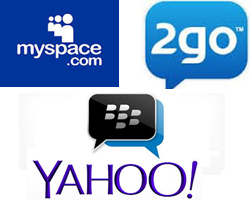 Although, sometimes it is surprising to see kings turning into servants within a twinkle of an eye; in other words for any tech company (other companies too) that want its products to stand the taste of time, then there should be no avenue for loopholes.


If any loophole arises, the company should be rest assured that others will take advantage of that to dominate and leave them reeling behind.

You can read: Blackberry awakening with Blackberry Windermere as the next flagship device

Without wasting any time, the 4 notable tech giants of our time that have been found wanting are;

1.      MySpace – This can be classified under social media Tech Company. MySpace in the past, founded by Chris Dewolfe and Tom Anderson was a social networking service that enjoyed virtually everything, ranging from fame, monopoly (low competition) and patronage. It grew with millions of subscribers across the globe especially users from the US. But Just as the saying goes ‘no condition is permanent ‘

What then happened to MySpace in this present era?

Exactly what I was saying...just at the sight of Facebook, MySpace went hiding. MySpace could not withstand the force that Facebook came along with into the Social Media World.

You may read: Facebook acquired whatsapp in a record breaking deal

Facebook owned by one of the youngest billionaire of all-time Mark Zuckerberg, came into existence, saw everything (loopholes) that was going on in MySpace and other existing social media networks and then conquered them completely within a short period of time.

Unlike MySpace, with Facebook, we are no longer counting in millions of subscribers but in Billions of Active Subscribers. At this point, I don’t need say much about Facebook because we all know what Facebook is made up of so let’s jump to the next one.

2.   2go – This is a social mobile chat company pioneered out from South-Africa. 5years ago this mobile chat app went viral especially in the sub-Saharan African regions and the world at large. Its growth took everybody by surprise and it even got to a point that if you are not having this mobile app on your mobile device, it will seem you are out of the world.

You may also read: The rise and fall of 2go mobile messaging social app

Even at all that, what happened to 2go at the sight of Whatsapp and BBM?

It was either 2go started lagging in some areas or as results of pressure from those two, they succumbed and paved way. Today Whatsapp dwarfs 2go in all ramification, and I don’t even know if people still use 2go for chatting.

3.   Yahoo – Yes Yahoo! What we have known for years as world number one web and e-mail solution Technology Company and that have really stood the taste of time in web dominance but all of a sudden decided to soft-pedal on the long run.

Immediately Yahoo decided to release their legs from the throttle, the almighty G accelerated and over-took them without even looking back.

In the past, how many people know of G-Mail?

They only know more of Yahoo Mail and a bit of Hotmail. But with the lagging nature of Yahoo still in recent times, Google who have been playing their cards well have no other choice than to capitalize and turn themselves King of the web in both Search Engine and E-mail services.

It is sad that Yahoo have felt to realize themselves even in this present time. Trying to log into Yahoo account with mobile devices these days have always been thug of war and the qualities of services recently have been dismal, I must confess.

4.   Blackberry – This is under the mobile tech company. Please who doesn’t know here that Blackberry once ruled the mobile tech world in smartphones categories? At this point I felt like composing a song titled “Goodbye Blackberry”.
After enjoying much dominance in the smartphone world, blackberry device today is seen as Sinking Ship. The big question here remains;
Why is Blackberry going underground?
I think I know the answer. It was a pity though for blackberry, that as a result of combined forces from Android and Apple and it seemed they both intrigued to push blackberry out of the market.

Recommended: BBM latest version, V2.2 for Android released, download now
Although you can never blame Android and Apple for Blackberry woes, they just came into the market with their style, and Blackberry now rat, seeing two big cats…I think they only option blackberry had was to take-off knowing well they are not ready for the combat.
Not only that Blackberry showed Android and Apple their Achilles hill, those other two fired straight in there and succeeded in killing and burying blackberry.

I repeat and leave you with these words “In this modern day, any tech company with products and dare lag then the fate that befell MySpace, 2go, Yahoo and Blackberry most likely is going to befall them too.”

Over to you, I know there are other tech companies facing the same fate today, if you know any and will love to mention, kindly use the comment box below to remind us and also share your opinion on that. You can also share this piece with the available social media buttons with your friends so they will also get the thrill.
4 Notable giant tech companies of our time that have been swallowed by others