skip to main | skip to sidebar
Home How to.......... How To Use Mobdro Multi-Channel Android Streaming App Effectively Without Cracking/Hanging And “Can’t Play Video Link” Error

In fact if you are not yet using this app on your android devices for streaming arrays of live channels, ranging in categories of sport, news, music, movies etc. with hundreds of sub-channels under each category, I will like to say that you are missing in action.

And the good thing about Modbro is that all the channels are in HD stream format depicting extremely clear streams. 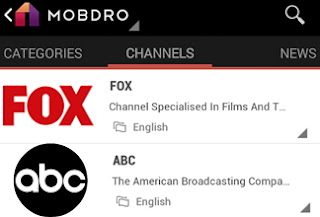 Now, I have noticed that some of you that are already making use of this magnificent app often complain of cracking or hanging of channels while streaming or that most times in trying to stream some channels, they often get “Can’t play video Link “error.

Having personally used the apps for some months now, I was able to figure out that those complaining about the app do not really know how to use the app effectively in order to maximise the huge potentials of the app in terms of clear and quality streams.

For those complaining of cracking channels and “can’t play video link” that you sometimes encounter, this is what I want you to know in order to be able to overcome those minor challenges while using the Mobdro android streaming app.

Have you noticed that when going through the Mobdro channels catalogue, you often see same channels being repeated?

If you have noticed that, then this is why your channels cracks/hangs or why you see the “can’t play video link” sometimes when trying to stream some channels;

Must Read: Simplest way of downloading YouTube videos to your desktop

The reason is that you often choose the top on the list of channel links, and we have observed that those channels that comes top of the channel categories lists are often the ones with bad stream links; either you notice that they crack/hang during stream or the links are not even available for stream and thus the “can’t play video link” that you often see.

For example if you want to stream your favourite football match on BT Sport 1 or Sky Sport 1 channels on Mobdro, you normally go to the Sport category and scroll to see any of those channels then you pick on the first BT Sport 1 that appears, but you often forget that if you scroll down further, you will also see more BT Sport 1 channels.

Those first one at the top often do not contain the best stream links, but rather the 2nd or even 3rd channels of similar sort are the ones with cleaner links, and the stream links are most times available unlike the first links that sometimes tell you “can’t play video link”

Those are the major things that you ought to know about the Mobdro app.

The trick here is always scroll downward to try out the 2nd, 3rd or even 4th same channel links and you will always get better stream links in those channels located downward.

You can download Mobdro app here and never miss your favourite champion’s league, Premier league or Spanish league game again and much more.
How To Use Mobdro Multi-Channel Android Streaming App Effectively Without Cracking/Hanging And “Can’t Play Video Link” Error